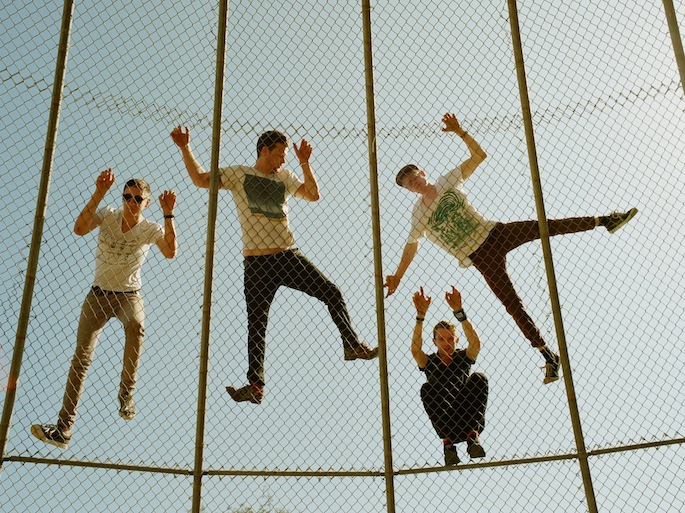 The enraptured audience that filled the Commodore Ballroom on Sunday was fit for a band with a few hit releases under its belt. But this chilled-out, flanneled, and bespectacled crowd was there to see Alt-J, the English rock quartet that put out its first album just under a year ago.

Understandably, the Mercury Prize–winning An Awesome Wave has won the hearts of everyone from the Peak 102.7 crowd to the hard-core music nerds, the songs combining ultra-quirky pop hooks with almost choral male dual vocals in an experimental (and successful) slant on folk. But the true test of a forward-thinking group of musicians is do they have the chops and the pipes to replicate eccentric material in a live setting?

In Alt-J’s case, not only did the band have the audience members at “Hello,” it had them at every musical turn that followed and right up to “Thank you and good night!”

Florida up-and-comers Hundred Waters gamely attempted to warm up the crowd, although their rather elaborate setup (synthesizers, at least two road cases of electronic gear, full drum kit) and complicated, atmospheric sound seemed a bit too big for the room.

Alt-J, in contrast, was a testament to the power of a simple setup. Following the instrumental zealousness of Hundred Waters, the group’s keyboards, two guitars, and drums were a welcome sight, and when the four lads from Leeds walked on-stage, it was clear that a love affair between them and their fans was already well under way.

The band smartly kicked off the show with songs one, two, and three from An Awesome Wave, quickly reminding everyone how much the album rocks and establishing right off the bat that the relative newbies of Alt-J can indeed hang with the big boys.

The most distinctive aspect of the group’s sound is its odd, precise male harmonies, sung by guitarist Joe Newman and keyboardist Gus Unger-Hamilton, and perhaps the most at risk of falling flat live. In fact, Newman’s small frame houses a big voice that might be unique in rock ’n’ roll right now, and Unger-Hamilton’s harmonies were perfectly executed.

Watching talented Gwil Sainsbury sway away on guitar and bass was like watching a little blond Jonny Greenwood. He even managed to make playing the castanets look rocking during the outstanding “Fitzpleasure”, which was the surprise climax of the show.

Predictably ending the concert with the infectious “Breezeblocks” brought on one of the most aggressive and heartfelt encore calls since Pearl Jam played at the Pacific Coliseum. Not only has Alt-J managed to earn a solid and adoring fan base in the space of one year and on the strength of one album, it’s mastered the art of leaving them wanting more, which everyone who was in that room undoubtedly did.

Read the story at Straight.com